Growing up in Lund

The life of Carl Fredrik Hill can best be compared to a circle, starting and ending in his childhood home on Skomakargatan in Lund, Sweden. He was born in 1849 in a cultivated home with his father Carl Johan Hill, a professor of mathematics, his mother Charlotte Hill and four sisters – Hedvig (known as Hedda), Marie-Louise, Charlotte and Anna. At school, he was described as hard to engage with. His moods fluctuated, and his classmates thought he was weird. He appeared uninterested in school and generally received poor marks – particularly in his father’s subject, mathematics. On the other hand, he was very interested in drawing.

Although Hill’s father did not want his son to become an artist, the family went on trips to Copenhagen to visit museums and go to the theatre. His father was simply worried that Hill might not be talented enough to make a living as an artist. Nonetheless, despite his misgivings, his father finally allowed him to travel to Stockholm to become an artist, allegedly because Hill’s older sister, Marie-Louise, threatened to leave home if Hill was not allowed to. 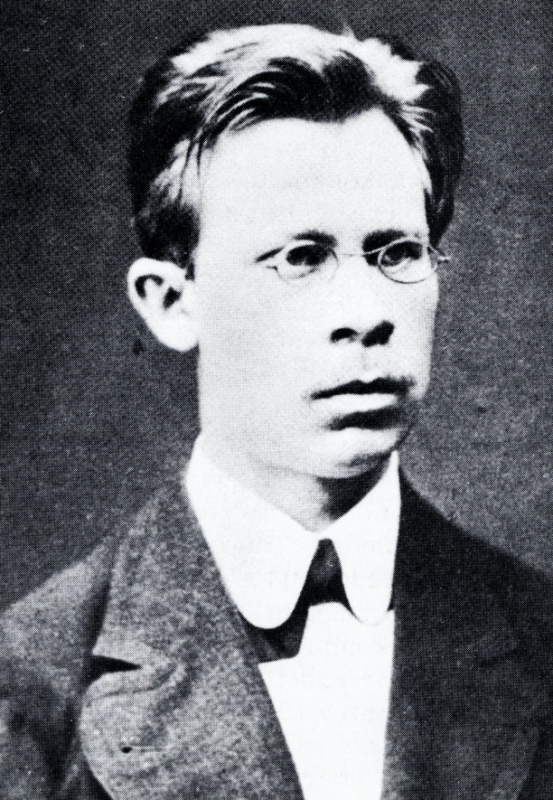 His sisters Charlotte and Anna both died at an early age of tuberculosis. Their deaths were devastating for Hill, and Anna’s death, in particular, took a heavy toll on him. Some Hill experts point out that the famous work, The Cemetery (in the collection of Malmö Konstmuseum) depicts Hill himself mourning at Anna’s grave. The work is charged with darkness and symbols of death, featuring bare trees and an almost imperceptible distinction between sky and earth. 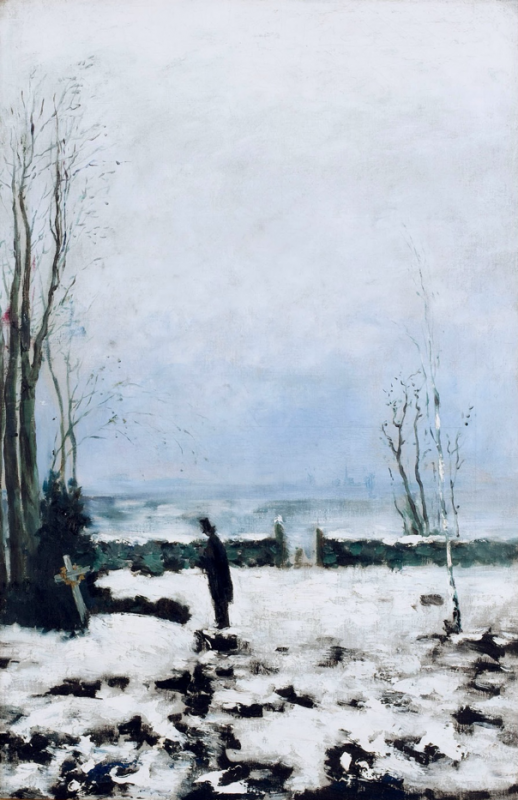 Unlike his father, Hill did not doubt his own talent and own capabilities. Even at an early age, Hill showed signs of megalomania. As the only boy among girls in the nursery, he proclaimed himself ‘King Me’.

From 1871 to 1873, Hill studied at the Academy of Fine Arts in Stockholm. The education here was traditional. Students did not paint landscapes, but studies after so-called ‘antiquities’. Hill mastered these studies impressively, and later made use of them in his drawings. In Stockholm, Hill could see the works of the old masters at the National Museum and was particularly fascinated by landscape paintings.

He faithfully followed the curriculum. However, following a summer in Småland, he had become so enthralled by its nature that he embarked on a large landscape painting. Unfortunately, when it was finished, the painting did not attract much attention. Hill thought it was too French for the Swedish audience, but over and again expressed confidence in his own abilities:

“Just wait,” he wrote home. “When I get to Paris and get to learn how to paint, I will make tons of money, and it will be my pleasure to show the old school here how rotten their false gods were.”*

The more the family feared Hill’s failure and what people in Lund thought of him, the greater Hill’s opinion of himself became. He did not care about Lund and had a generally strained relationship with his hometown.

“I get sick at the very thought of returning to the most abominable of all rotten swamps, Lund.”*

The next stop for this budding landscape painter was Paris.

“Asphalt is the colour of my life”

In 1873, his ambition to become a landscape painter led Hill to Paris. He craved inspiration and art, but soon found to his cost that his work was inferior to that of the French landscape painters – particularly Corot (1796-1875), whom he really admired.

In Paris he discarded bright colours in favour of a darker palette in the style of the painters of the day, whose twilight, mysterious depictions of nature he was striving to emulate. “Asphalt is the colour of my life”, he wrote home in a letter to his sister Marie-Louise.* The works of the Impressionists also fascinated Hill, who was now beginning to find his own feet. He had no interest in the city. Instead, he was drawn to dramatic landscapes such as gravel pits and quarries.

However, the fact that Hill had a painting admitted to the Salon in Paris and garnered positive press coverage increased his family’s faith in him back in Lund. But his time in Paris was beset by fluctuating health. He was afflicted by a variety of diseases – some real, some imaginary. His career also experienced ups and downs, culminating in the rejection of two of his paintings by the Salon. Hill’s family was worried about him. Showing incipient signs of an unstable mind, he was now attempting to exhibit at the 1879 Exposition Universelle. He sent a list to Lund containing descriptions of paintings he wanted to exhibit, with motifs of everything from the ‘Nøkken’ (a mythological creature) to cemeteries and gloomy gardens.

However, Hill never managed to send any works to the Exposition Universelle.

Hill’s fascination with twilight, secrecy and mystery is evident in his painting Autumn Landscape. Evening in Fontainebleau. The landscape is sombre and dark, yet beautiful. We also see how bright colours had ceded to a toned-down palette. 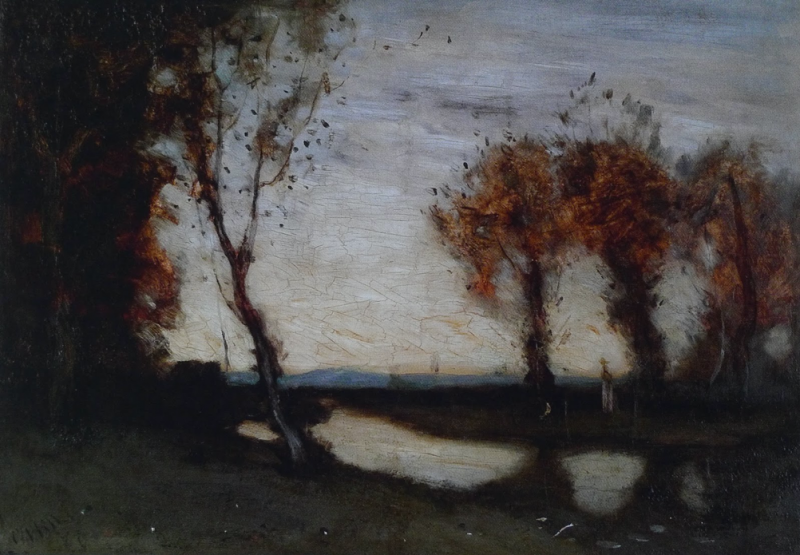 In Paris, Hill’s fellow artists began to witness a new version of Hill. Suddenly he was coming across as completely insane, and they thought he required urgent help. He suffered from persecution mania, he screamed at night, and he painted strange pictures. In 1878, under coercion, he was hospitalised at Dr Blanche’s clinic in Passy, France. Here he was diagnosed with paranoid psychosis – better known as schizophrenia. At times he would appear perfectly healthy, while on other occasions he believed he was a king or a member of the spirit world.

In 1880, Hill was sent to St. Hans Hospital in Roskilde in Denmark, and then to St. Lars in Lund. While hospitalised, he continued to paint, and embarked upon some of the first drawings that later became known as the ‘illness drawings’. In 1883, Hill moved into his childhood home on Skomakargatan in Lund, where his mother and his sister Hedda took care of him.

The Microcosm of Lund

As the man in the house, Hill moved into his late father’s study, surrounded by mathematical manuscripts and the many books in the Hill family library. Here, at his father’s old desk and in solitude in his childhood home, Hill began to produce vast numbers of drawings, including the many illness drawings.

In the drawings, Hill’s lonely world is populated by wild animals, ancient sculptures, Egyptian mummy portraits, people and figures, all of which Hill could find in the books in the family library or in his own mind. Hill worked at the speed of lightning, producing several drawings a day. Once again, landscapes figured in these countless drawings. A number of paintings from his time as a landscape painter hung on the walls of the family home. Several drawings resemble a number of these paintings, while many of the landscapes in the drawings reflect landscapes from distant horizons – outer landscapes taken from the books and the inner landscapes in Hill’s own mind. One of the few occasions on which Hill left the house in Lund was when he, his mother and sister went on an annual trip to Copenhagen to visit museums.

Despite the fact that Hill spent his time sitting alone in his study in Lund, his view of himself remained unchanged. On one of the drawings, Le Coupeur de Gorge (The Throat-cutter), Hill wrote: “Zeus = C.F. Hill.” During this period, he also referred to himself as “Maximus Pictor” = the greatest painter in the world. 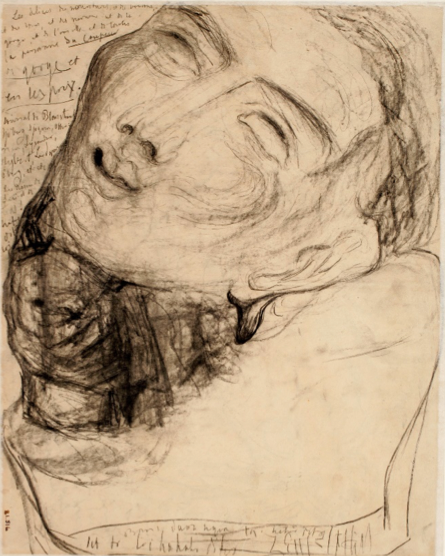 In the wake of Hill’s death, it was his landscape paintings that aroused interest. Prominent museums and collectors began to purchase his paintings for collections in Sweden, and Hill was heralded as ‘Sweden’s Great Landscape Painter’. It was not until 1933 that Hill’s illness drawings came to light in the context of an exhibition at the Academy of Fine Arts in Stockholm. Since then, the drawings have attracted a great deal of interest and are regarded as something quite unique in the artist’s oeuvre. Along with the most vibrant of Hill’s landscape paintings, the drawings testify to a special Nordic artist’s sensitivity. Hill, like several of his fellow Nordic artists, including Edvard Munch (1863-1944), possessed a fragile mentality that evolved into a mental disorder.

In many ways, Hill can be viewed as a pioneer for several artists and styles that would later form various chapters in art history. His dream worlds anticipate those of the Surrealists in the 1930s. His depictions of figures are harbingers of Modernism and works by great masters such as Henri Matisse (1869-1954) and Pablo Picasso (1881-1973). His frenzied landscapes feature the same trembling quality as the inner worlds of the Expressionists as portrayed in their works. That is also why he is considered a ‘Modernist before Modernism’, a ‘Surrealist before Surrealism’ and an ‘Expressionist before Expressionism’.

From time to time, contemporary artists and poets draw inspiration from Hill’s works. These include the Swedish poet Lars Norén (1944-2021), the Danish artist Per Kirkeby (1938–2018), the German artist Georg Baselitz (b. 1938) and now Tal R and Mamma Andersson.

The exhibition Tal R & Mamma Andersson – About Hill is on display from October 14 until April 10 2023.