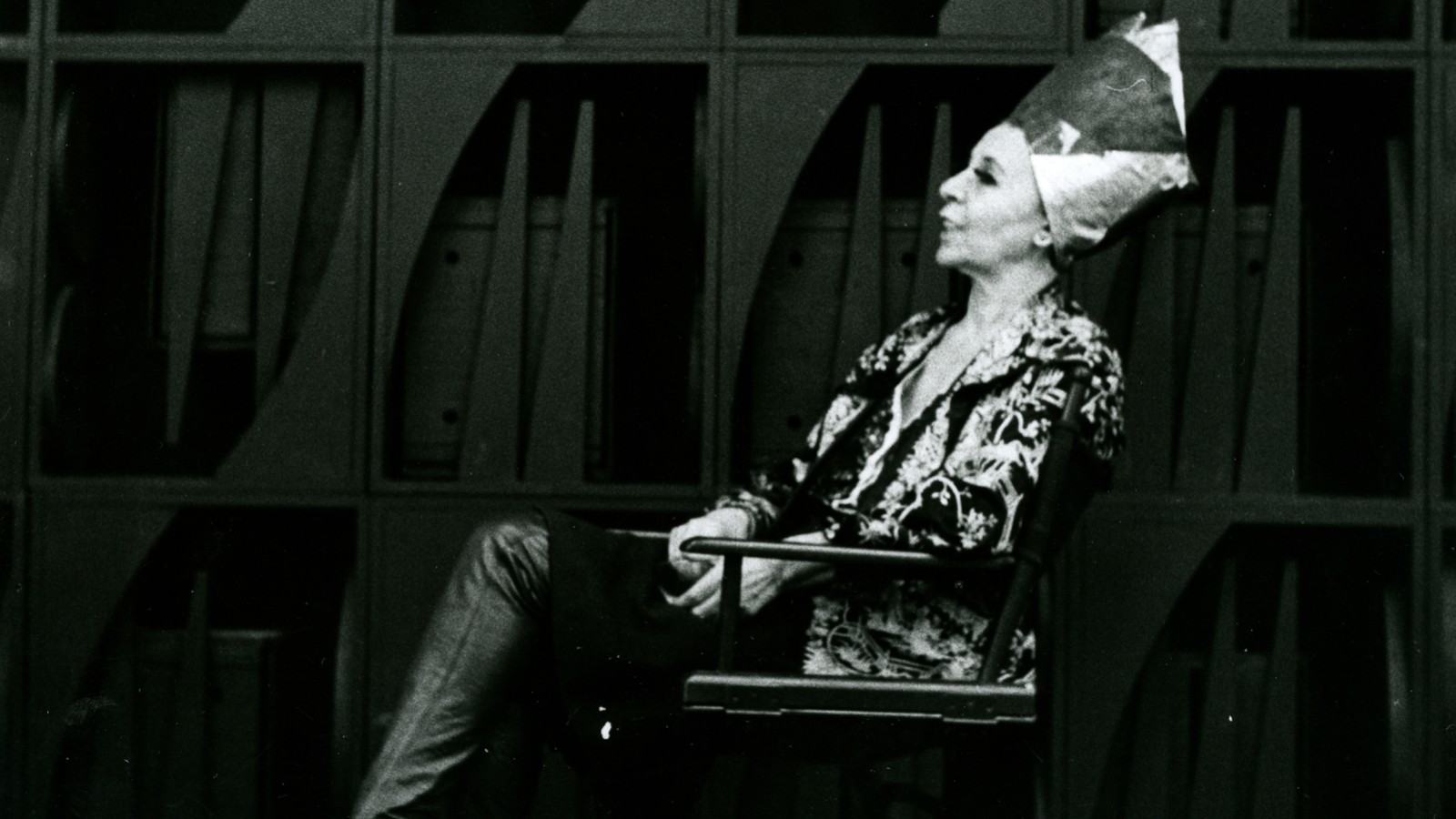 “If I want a castle on a cloud, I’ll bloody well build it!”

Louise Nevelson is one of the most famous American sculptors of the 20th century. Kunsten is about to open a solo exhibition of works by this artist who was remarkable in so many different ways.

To say that the sculptor Louise Nevelson (1899-1988) was ahead of her time is an understatement.

She was a Russian emigrant and one of the instigators of installation art. Today she is world famous, but not until the age of 60 did she experience a real breakthrough. She created her works out of discarded wood or rubbish from construction sites. For her, rubbish was a resource and source of artistic inspiration. Louise Nevelson was also very much a self-made person.

In her private life, she refused to be a traditional housewife and abandoned her family in pursuit of her artistic dreams. In the interview, she describes how the decision was obviously a tough one, but there was no other choice. She simply had to devote herself to the love of her life - art:

“The worst thing that could have happened was to have remained married to the same my for my entire life. I can’t even bother holding on to friends that long. People say: ‘He’s been my friend for 50 years.’ God forbid! I don’t like keeping anything for that long,” she said in the interview.

“Even today, it would be extremely controversial if a woman left her family and life as a loyal mother and housewife in favour of her own passion and art. But Nevelson was not afraid of defying norms. That is fortunate for us, because we can now enjoy the works, which amounted to the only real and constant love affair of her life,” says Stinna Toft, Chief Curator at Kunsten.

Regarding people’s reaction to the fact that she abandoned the security of a home for an uncertain fate as an artist, Nevelson said:

“Sure, a woman leaving her husband obviously met with people’s disapproval. My husband’s family was terribly refined. Within their circle you could know Beethoven, but God forbid if you were Beethoven. Renouncing money and comfort to live a wretched life and work in a rotten workshop was regarded as some kind of madness.”

One might be tempted to label Nevelson a feminist or a ‘strong woman’. However, career-driven men are rarely referred to as ‘strong men’, so why should she be?

“I’m not a feminist. I’m an artist who happens to be a woman,” she said laconically.

She also told Brøgger that she never aimed to be, or saw herself as strong:

“I’ve never said no to sex, and I love tarting myself up and getting drunk, and swearing and getting up to all manner of fun and games. Then people call me strong. But what’s strong about me? I just can’t say no.”

Incidentally, Nevelson never committed to a new permanent relationship, but now and again chose men on a more casual basis. The great love of her life was art. She lived together with her works and materials for future works in one apartment after another in New York.

By the time of her death, Nevelson had achieved wealth and fame, and today her works grace many prominent locations throughout the United States. But her road to fame was a long one.

In the early days of her career, she stole bits of waste timber from containers and the backyards of timber merchants, before assembling them into her famous monumental sculptures, which she mainly painted black. In Nevelson’s younger years, New York was in state of evolution. Old timber buildings were demolished and, in many cases, burned in the streets to make way for new buildings in concrete and brick.

“She regarded New York as one giant sculpture. The life, sounds, colours, architecture and development of the city represented a major source of inspiration for Nevelson, even 1:1. Her sculptures include construction debris from the city. It is believed that the smoke and fires formed the inspiration for her largely black works. She also loved black, since it is the sum of all colours,” says Stinna Toft.

She would later come to more formal agreements with suppliers and also began making sculptures and collages in white and gold. She made her major breakthrough in 1959, at the age of 60, in the group exhibition Sixteen Americans at the Museum of Modern Art in New York with the work Dawn’s Wedding Feast, the remaining elements of which feature in the exhibition at Kunsten. This breakthrough subsequently paved the way for her to exhibit at the Venice Biennale. She frequently exhibited alongside far younger, male artists.

Today, she is just as widely known in the United States as Asger Jorn is in Denmark. She created altarpieces and large, public decorative works, enchanting viewers with their mixture of elevation and roughness. She has been referred to as ‘Furniture Mystic’, ‘Architect of Shadows’, ‘The Queen of Assemblage’ and ‘Art’s Answer to Karen Blixen’. The comparison to the Danish author is rooted in Nevelson’s personal radiance and strength, as opposed to her works.

Louise Nevelson was one of the most important American sculptors, making a significant contribution to the development of American Expressionism. With roots in both Cubism and Surrealism, Nevelson succeeded in transferring her experience as a fugitive into an artistic mission.

The exhibition features several of Louise Nevelson’s characteristic works: monochromatic, monumental sculptures. The exhibition includes assemblages several metres long, created out of found pieces of wood and painted in monochrome colours - black, white and gold - and small, poetic collages that are rarely exhibited. The largest work in the exhibition is about 9 x 3 metres.

As part of Kunsten’s The Past Retold series, this exhibition will include a broad selection of Nevelson’s works dating from the mid-1950s to the 1980s. Together, they will provide an in-depth insight into this artist and her powerful wooden sculptures.

Her black wooden sculpture and the shadows that play a key role in the artist’s practice, will form a special basis for our appreciation of Nevelson’s work. The exhibition will also tell the story of a highly idiosyncratic artistic personality, who dedicated her life to art, making it an active element in her artistic mission.

The exhibition will be presented in Kunsten’s Main Gallery. Its enticing light will set the scene for a holistic sensory experience, underpinning the theatrical dimension that is inextricably associated with Nevelson’s art. The light, which was so important to Alvar Aalto in his architecture, will interact uniquely with Louise Nevelson’s massive, physically alluring works.