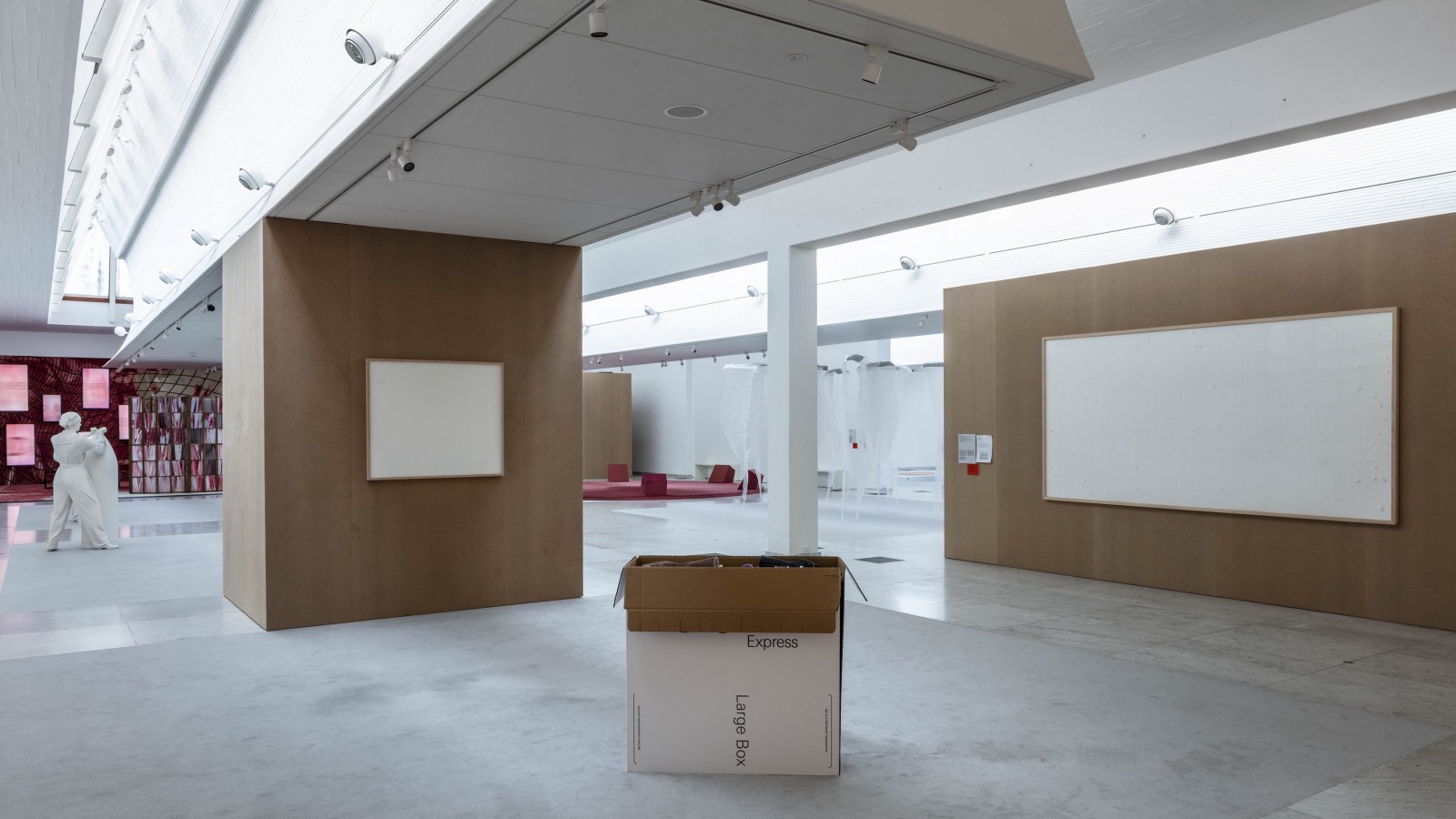 ← More about the current exhibitions

Born in Denmark, 1965. Lives and works in Copenhagen.

Two frames with blank, white backgrounds are exhibited at Kunsten Museum of Modern Art Aalborg. However, this was not the initial plan. In the winter of 2020, the Danish artist Jens Haaning was invited to participate in the exhibition Work it Out with two works from Haaning's previous production: An average Danish annual income from 2010 and An average Austrian annual income from 2007. The two works were included in the exhibition's theme as the works illustrate what an annual income actually looks like when it is completely physical. The works point to wages as an instrument for measuring the value of labor and to national differences within the EU.

The work Take the Money and Run (2021) is inscribed into an art history that leaves materials as a trace left behind or a framework for an idea or an action. A well-known Danish example is artist Bjørn Nørgaard's work Hesteofringen from 1970, which created a great deal of media attention due to the act of killing, parting and subsequently exhibiting a horse. The work was a commentary on the ongoing Vietnam War, but focus and reactions were primarily on the material used for the work and not on the intention behind it.

An example from recent international context, is the artist Banksy and his work Love is in the bin, where half of the artist's famous work with a little girl with a balloon was automatically shredded, right after the work was sold at an auction. Banksy also changed the title of the work from Girl with a Balloon to Love is in the Bin, quoting artist Pablo Picasso for the words "the urge to destroy is also a creative urge". Banksy's practice is critically illuminating the lack of democracy in art based on his background as a street artist. Here, it is also important to point out that Girl with a Balloon was sold for 1 million GBP and is now up for auction again in the autumn of 2021 with a valuation of 45-52 million GBP as Love is in the Bin. The capitalism critique of activist art is thus paradoxically included as part of a global, commercial art market.

Similarly, Haaning's new work Take the Money and Run is also a recognition that works of art, despite intentions to the contrary, are part of a capitalist system that values ​​a work based on some arbitrary conditions. The valuation of art can be about the name of an artist, which gallery the artist is affiliated with and what art collections the work is a part of. The work can therefore both be seen as a critique of mechanisms within the art world, but also points to larger structures in our society. All as an item that can be calculated in monetary unites. Even the lack of money in the work has a monetary value when it is designated as art and thus shows how the value of money is an abstract quantity.

In recent years, there has been a greater focus on artists' working conditions in Denmark. For many years, both artists, freelance curators and intermediaries have talked about deficient employment contracts and changing fees as well as lack of financial support. In recent years, however, Danish museums have closely collaborated with the Association of Visual Artists, BKF, which ensures contracts and a minimum salary for artists.

Read more about Take the Money and Run here.